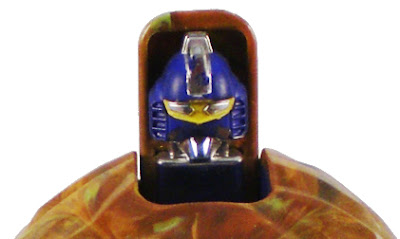 Blast Rock is another of the final wave of Rock Lords to be released. Like his fellow heroic Shock Rock Stun Stone, Blast Rock is a ball with a head. It's not even clear if he has arms. Is Blast Rock's life constant pain, or is he truly the greatest of Rock Lords? 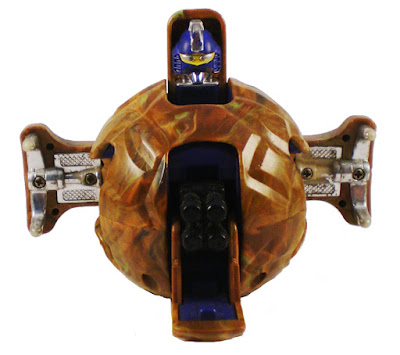 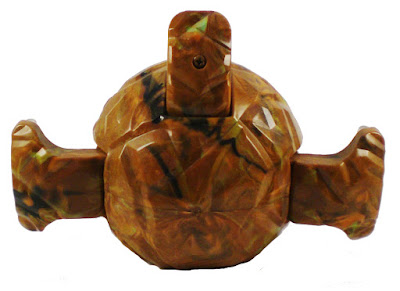 As mentioned in the Stun Stone article, he and Blast Rock bear an uncanny similarity to each other, but are in fact completely different. This is very strange, as to the lay person they look like straight repaints. Blast Rock has a smaller head with a more traditional helmet, some sort of spiky things instead of arms, and a cannon that slides from his front rather than treads. Would anyone have noticed if he was a Stun Stone repaint? Probably not, but let's not condemn the designers for not cheating! 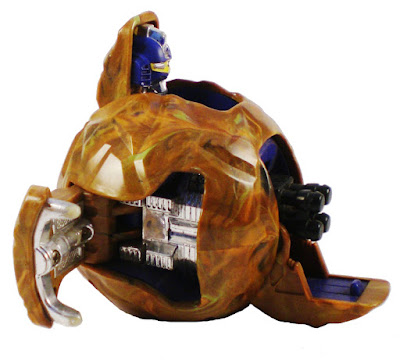 Like Stun Stone, Blast Rock has a lot of chrome but this is mostly saved for his arms and the inner sections that are revealed as his arms spring out. Unlike Stun Stone, Blast Rock doesn't really have arms, instead he has strange radar-dish looking protrudances. They might be guns, but the bumps on it don't look very gun-like. The weapon that slides out of his front is more successful - thanks to the mechanism, it doesn't just flip down but instead moves forwards and out, giving him a bit more visual interest. 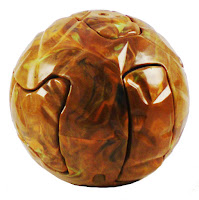 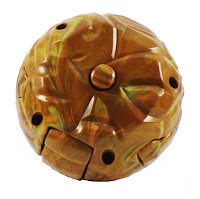 Blast Rock comes in two variations - a brownish version released in Europe (which we see here) and a much brighter orange version released in America. It's quite hard to tell the two apart on Ebay listings, as over/under saturated images can result in one looking like the other. At first glance he's quite a boring brown, but there's a lot of interesting colour swirls in his plastic, from black to orange. Someone working at the factory certainly enjoyed their colour swirls!

Like Stun Stone, Blast Rock's transformation is triggered by a button on the base of the rock mode which you're supposed to trigger by rolling him along. The transformation is pretty much identical to Stun Stone so if you have one, you know what to expect from the other (the third Shock Rock, Dragon Stone, had a different transformation).

Blast Rock is pretty hard to get excited about, unfortunately. He's functionally the same as Stun Stone, but brown and so looks much duller in comparison. I feel like I'd probably be a lot more thrilled about the brighter orange version, but I've never managed to get my hands on one! Still, he gets points for just being so bonkers - it's hard to work out what was going through the mind of the designer, and the spring-loaded transformation mechanism is at least therapeutic to fiddle with!
Posted by Matt at 11:00