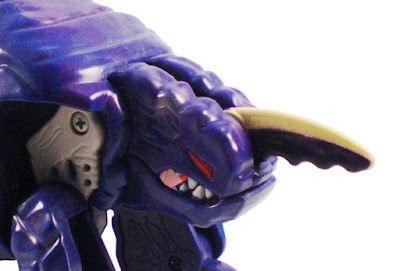 Spike Stone excites me like no other Rock Lord does. Not for any of his innate charms, but for the sheer nostalgia factor in that he was the first Rock Lord I ever owned as a child. He's also a complete brute! The Rockasaurs were two larger Rock Lords (they came in boxes!) that were based on dinosaurs rather than people. It's a great idea (and makes more sense than the Narlies as the animal life of Quartex) and a pity they never made more of these! 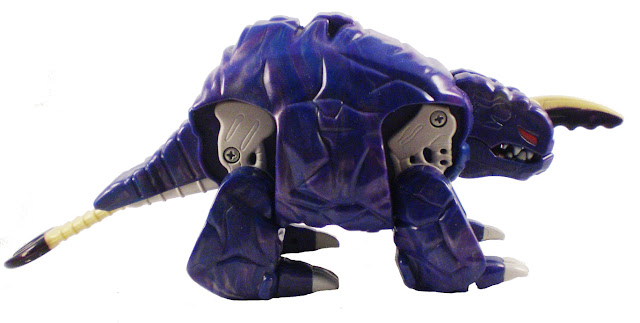 Spike Stone's box claims that he is related to a Triceratops. This is a complete lie, as if the writer has never seen a Triceratops before. Triceratops have triangular faces, with a huge head-crest and spikes. Spike Stone has... a spike. Sure. Why not. His head does look effective though, the square cut of it giving a feeling of power. His jaw opens very slightly to bare his teeth, but not much at all. Interestingly the roof of his mouth is molded, and the screws inside painted as if it was meant to be seen more clearly. There's a tiny tab inside him which is designed to stop the mouth opening as if it was designed for a fully opening mouth and the designers later changed their minds. I will be taking a knife to a junker in the future to see if I can get the mouth working!

He isn't just purple, but a lovely pearlescent purple, with whites and blues swirled in there. Whilst he doesn't look very complex, the fact that most of him is made out of a solid untransformed rock gives his body a very bulky quality, perfect for a strong rampaging beast. Spike Stone's most notable features are the spike on his head and his wicked pincer-like tail. Unfortunately these are cast in a softer plastic, which seems to inevitably yellow. I have owned around half a dozen of these, and all yellow in exactly the same way - even more obvious when seen against the crisp white plastic of the rest of his body! 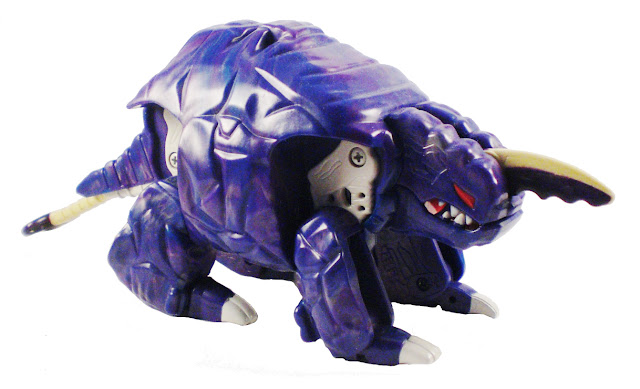 One detail I love is that there is inlaid bone designs on the sections of body where the legs emerge, giving the impression that Spike Stone is some sort of zombie monster - remember, the Rock Lords were created after some rock-based catastrophe turned all life on their world to Rock. These bone parts are specially inlaid pieces of plastic, and could easily have been left out with no ill effects, but the designers once more went the extra mile to make the toy more interesting. Only the two Rockasaurs feature these bone designs though - not even the Fossil Lords! 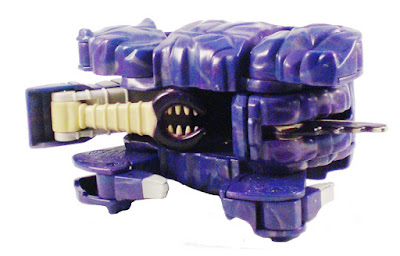 Spikestone's transformation is straightforward - his legs fold in to the obvious leg slots and his head and tail tuck in. There's a neat part where the double-jointed tail folds into the body, but as far as transformations go there are no surprises.  It isn't fiddly though, and it actually works (with the exception of the head spike) without any trouble. 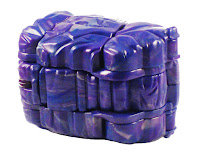 In rock mode, Spikestone is a big chunky rock. He's not that big though - around 1 1/2 the size of other Rock Lords and doesn't really seem the justify the big box he comes in! There's a nice heft to him, and it's a solidly convincing rock. The only issue with it is the spike on his head is held in place by friction alone, and sadly gravity will always make it want to flop down, leave you with a rock that has a spike sticking out!

Spike Stone is overall a satisfying figure despite the few issues he has, mainly with the head spike not wanting to stay in rock mode and the tendency of the softer white plastic to yellow. He's got a striking design and is common enough that you can easily troop build a herd of these to roam the fields of Quartex (or your front room)!
Posted by Matt at 11:00