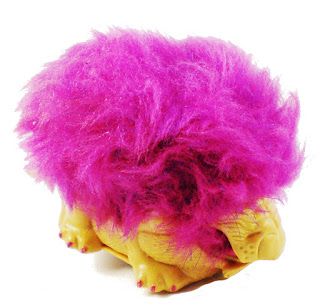 The first wave of Narlies - Narlihog, Narliphant, Narlizard and Narligator are quite common to find. Far, far rarer are the second wave, consisting of Narlilion, Narlibaboon, Narlirhino and Narlibat. Extremely hard to find, in fact. Ridiculously hard to find. This is the pain of collecting Narlies - half of them are tricky to get hold off, and at the same time, they're flipping Narlies! 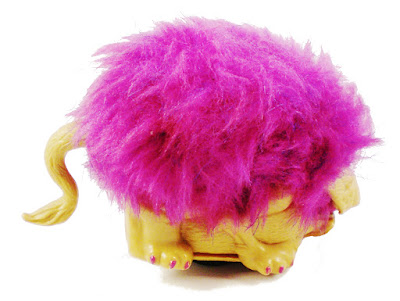 If you're lucky enough to get one of the second wave of Narlies, it's a strange experience. They're familiar enough (all Narlies are the same after all) but they're still very different from the more common original four. I have no idea if this is just luck of the draw or changes in the design, but Narlilion feels very different from a series one Narlie. His fur is a lot fluffier, and his mechanism (mouth opening and tail waggling as he rolls along) works a lot more smoothly, operating on smoother surfaces that the earlier Narlies found tricky. 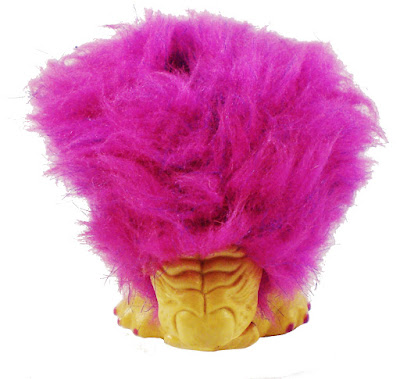 Narlilion (it should have been Narlion, come on Tonka!) features bright purple fur (just like a real lion) and an actual lion coloured tan plastic. While the sculpt is very distinctive, his large flat eyeless face with huge nose looks more like a toe than a lion. There's probably too many ridges on the head, giving him a grotesque appearance, but it is clearly deliberate (unless the designer had never seen a lion). 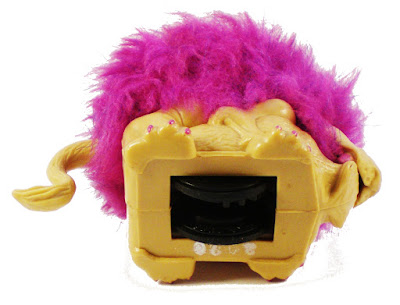 The only paint detail are purple claws and fangs - unfortunately this makes the fangs indistinguishable from the purple fur, but it's still nice that they made the extra effort to pick out these elements rather than leaving them unpainted. Thanks to the flat, wide head he feels a bit bigger than other Narlies too.

Narlies probably won't excite you unless you are a die-hard Rock Lord fan but Narlilion has the right mix of attractive colour scheme and tempting rarity to make him a nicer pick than some of the first wave Narlies. Nothing about him particularly stands out apart from the fur colour, but as a figure he seems to work a lot better overall  and be a lot more cohesive than the earlier designs.
Posted by Matt at 11:00