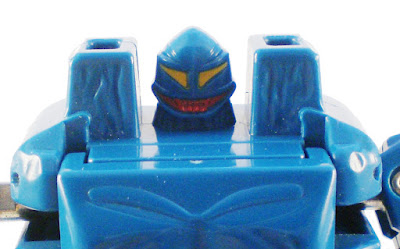 Hipbone was the Fossil Lord who didn't skip leg day! This huge guy is all about the legs, which is lucky for him as there's not really much else he has going for him! That said, he's still a Fossil Lord, where the sum is greater than the parts! He's not something you see every day though, and has enough interesting points about him. 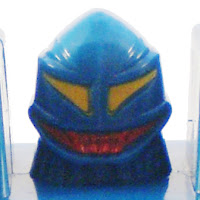 Hipbone's face features a wicked red smile which with his eyes makes him look incredibly sinister. The Fossil Lords are supposed to be good guys, remember (at least according to the movie) so it's a bit surprising to see a head sculpt so evil looking. Thankfully his head is large enough to make the proportions of his body less odd than had it have been Ribcage sized! His face looks a lot like Stoneheart's, the colour scheme helping this effect, though obviously both are very different overall. 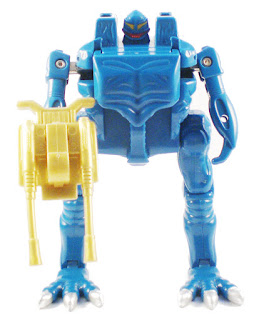 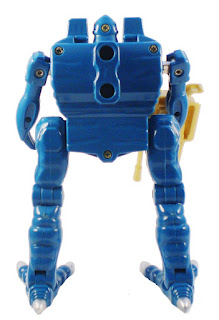 Hipbone is actually quite similar to Ribcage. Both have large clawed legs, big boxy bodies and small arms. They even both have similar looking connector ports by their head! This helps to make them look more cohesive as a team, and there's enough differences in them that they don't seem to be carbon copies of each other.

Hipbone's size is hard to escape. He's easily the biggest Rock Lord, standing at 13cm high. Most of this is due to the legs, which are also the combined mode legs. They do have a slightly different placement than in the combined mode though, thanks to an octagonal connecting system. They sit slightly higher up the body and wider out in combined form, but they still feel too wide in humanoid mode giving him a 'thunder thighs' look. The squat body and tiny arms adds to this effect. 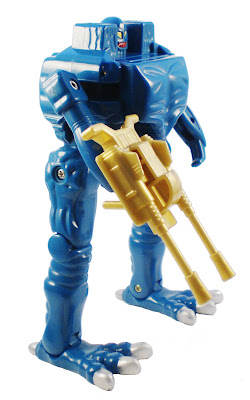 For a character that is all legs, he doesn't have much usable leg movement. The legs lock into place in predetermined points (assumedly so that the combined mode won't collapse under the weight) but the knee joints tend to be rather loose and only lock in place at their fully extended point. Due to his transformation his arms have full shoulder movement, but they are small so end up looking quite comical! 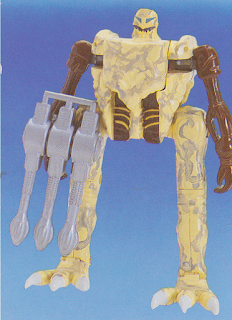 Hipbone didn't change too much from his prototype, though notably his arms were originally much longer (this would have affected the combined mode too much as there would be nowhere to properly stash them) and he lacks the combiner ports in his shoulders. The colours help to break up the body and make it look more interesting, though I'm not a fan of brown and bone! 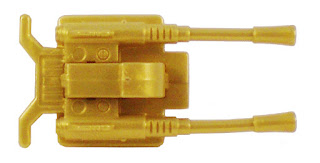 Despite being the biggest Fossil Lord, Hipbone's gun is actually quite small. It's a dual barrelled laser, and looks formidable enough. In a way, the wide dual barrels reflect his wide tall legs, which is neat. He holds the gun via a hole in his wrist, as he has no fist, just long fingers. 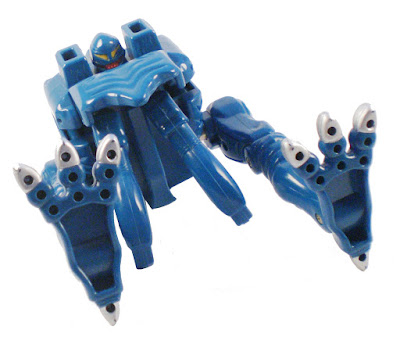 His transformation goes as you'd expect. His chest hinges open to reveal a compartment for his arms. His hips pull out on a cylinder and then lock into place in a slightly higher and wider position. The hiding of the arms is quite satisfying, but that's about it. His head stays in place (as it is hidden in combined mode) and the whole thing just stands there. 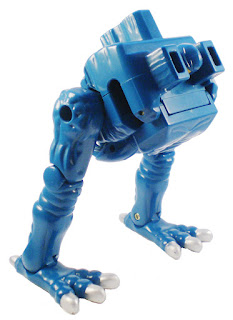 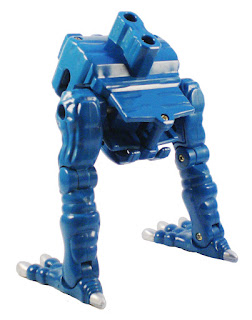 Again, I must reiterate that these were going to be sold individually. I can't imagine why Tonka decided against selling a crotch! Yes, it does its job in the combined mode, but on its own it isn't particularly exciting. It's a bit too heavy to pose in any other position than with the legs locked straight, and clearly wasn't designed to be its own unit!

It's hard to get around Hipbone's odd proportions. He is clearly first and foremost the legs of the combined mode, but at least some effort is put in to make the humanoid mode more presentable, but the leg placement doesn't move enough to be that effective. The rest of him is just strange enough to pull it off, but he's probably my least favourite of the Fossil Lords.