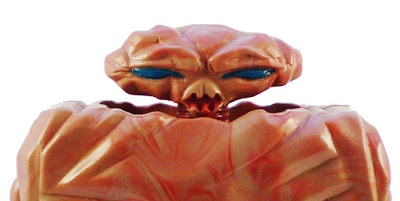 Girl characters in toylines are often either stereotypically pink girly-girls or all boobs and ass. Saberstone... well, she's pink but she's more of a 'flayed flesh' pink than a shade that reminds you of delightful ponies.  Instead of sweet feminine liens she has a terrifying monster face and whips for hands. Rock Lords once more blazes the way in smashing down social norms!


Of note, Saberstone was released as 'Sabrestone' in the Bandai European release, but I am going to be a cultural traitor and refer to her as 'Saberstone'.

It's actually cool that they decided Saberstone as a female character, as there's nothing about her design that screams female. The entire Gobots line was rather good at a balanced gender spread though; Rock Lords was actually behind the curve with just Solitaire and Saberstone being female. Saberstone's face looks incredibly alien, like a Grey that you'd see from the X-Files. It's terrifying, and carries off the "I am a horrible monster" look very well! 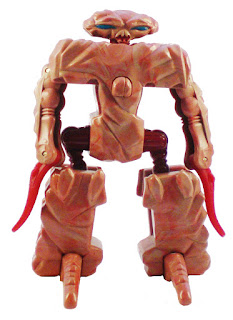 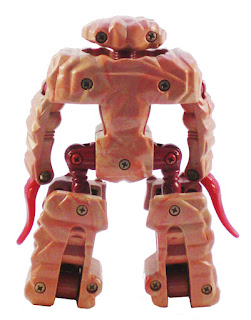 Saberstone is very unique in her look. She's very gangly, with whip hands, thin thighs and long thin feet, but at the same time her lower legs, face and body are big slabs of rock. The fleshy rock colour and dark red joints make her look like a Rock Lord held together with sinewy strands of bloody muscle. Which is lovely.

Everything about Saberstone screams "I am flippin' weird!". She's even got a big button on her chest which makes her head pop up! Not the back, the chest! The whip arms are a great idea, though the shoulder mounting makes it hard to do much with them. The same goes for the heavy lower legs, but as a design it is certainly striking. Her weapon (which unfortunately I don't own) follows this trend, resembling a giant comb (well, she is a female figure!) 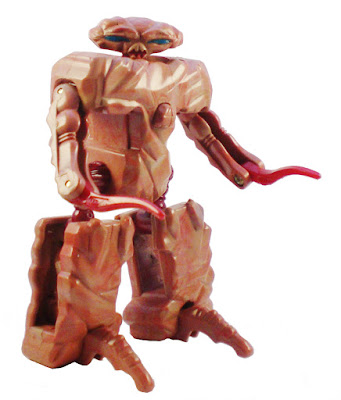 Her upper arms are held on with rivets. Fr some reason this doesn't seem to be very strong, as it is common to see Saberstones missing one or both arms!. It's also common to see her head mechanism jam slightly. 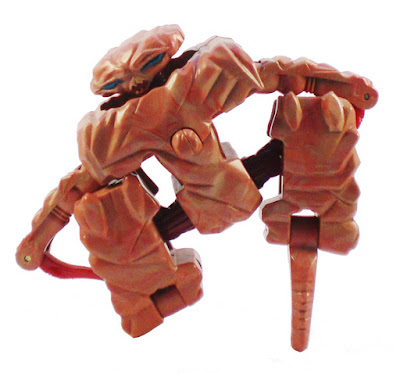 Saberstone's transformation is pretty obvious. her head clips down, the legs fold up, and the whip-arms fold into themselves and then into grooves in the side of the leg. One nice touch is there are bits of rock on the top of the knees that overlap with the chest, giving the rock mode a slightly more cohesive look, and the arms locking into the side is satisfying. 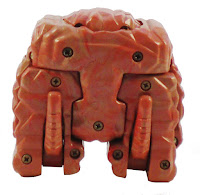 While Saberstone's oddly shaped legs fit into the torso without gaps, the flaws in her rock mode are obvious: namely the holes made by the underside of the feet, and the big gap in between the legs. Just a bit more filling out of the rock mode would have made it more solid-looking, and it's a shame. The mottled plastic hue does disguise the button on the top more than if it was simply a solid colour. I have no idea what sort of rock she is, presumably a slab of flesh.

Saberstone is... yeah, wow. You certainly can't accuse Rock Lords of being boring and playing it safe! She looks like a monster, and there's a very clear design ethos that permeates this at every level, from the scary face to the whip hands and strange legs. Yes, the rock mode isn't perfect, but there's enough there to keep your interest!