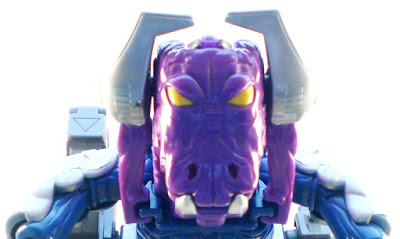 If there is ever a crown jewel in a Rock Lords collection, it is surely Fossilsaurus. Due to be released in the US, it was eventually only released in Japan and parts of Europe towards the tail end of the line, and extremely hard to get hold of. Added to this is the fact that it's a flipping Rock Lords combiner, which most people's minds would just refuse to believe exist! If you didn't have a burning need for a big rock dinosaur before you read this, I guarantee you'll have one afterwards! 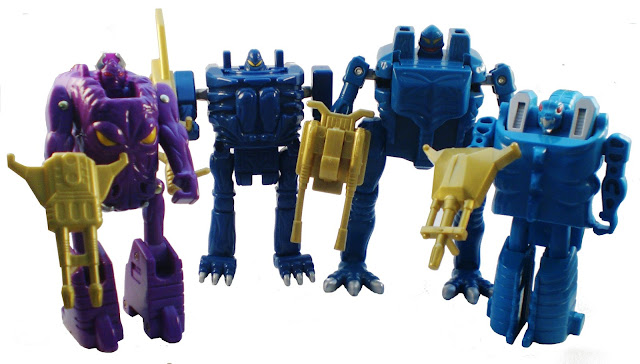 I may have come across a bit negative in my reviews of the individual figures that make up Fossilsaurus, but that is for good reason: on their own they're not particularly exciting. True, they all have neat and clever aspects to them but the lack of individual modes really hurt them (especially as they were due to be sold separately as well as in a box set!). Like most things though, the sum of the parts is far greater! They're a team and should be judged as a team. Put together you can see how they complement each other: all with animalistic designs that reflect each other, with the two tall, thin ones and two shorter, stockier ones, and aspects such as the shoulder vents tying them together. 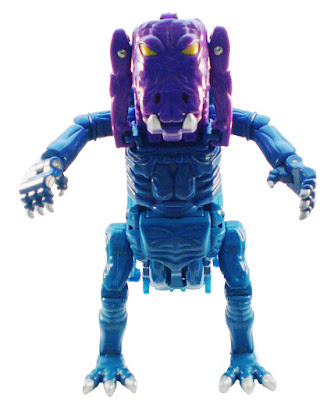 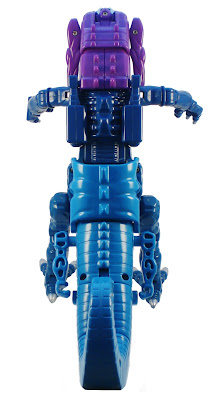 Fossilsaurus, ladies and gentlemen! Or rather, the unarmoured mode. As a dinosaur it looks fantastic, with very few robot parts showing (the exception being Tailbone's arms on the side of the tail, though at least they're slightly camouflaged). The proportions work really well and it looks a massive, imposing beast! The only downside is the indent in the stomach - this is filled in by the armour, but looks strange without it (and the US release was to be without the armour). 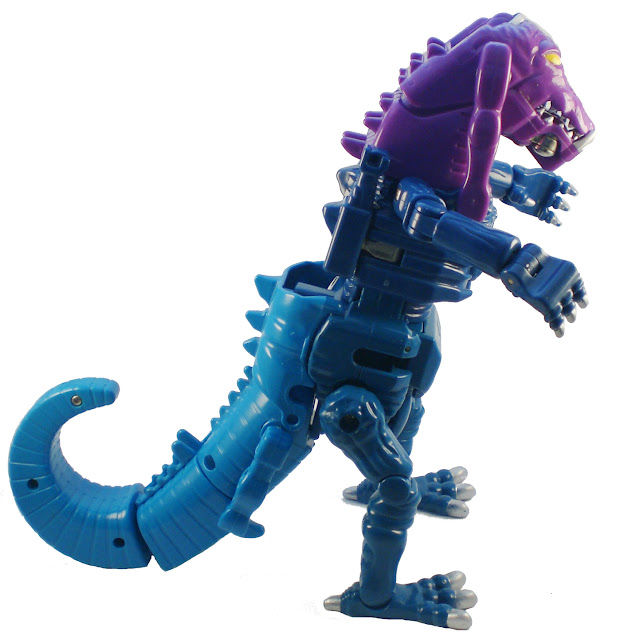 Whilst the colours of the Fossil Lords all complement each other as various shades of blue, Jawbone's purple is properly one shade too bright, causing the head to stand out a bit too much given the similar hues of the rest of the dinosaur. Perhaps real rock dinosaurs looked like that though, we just don't know! 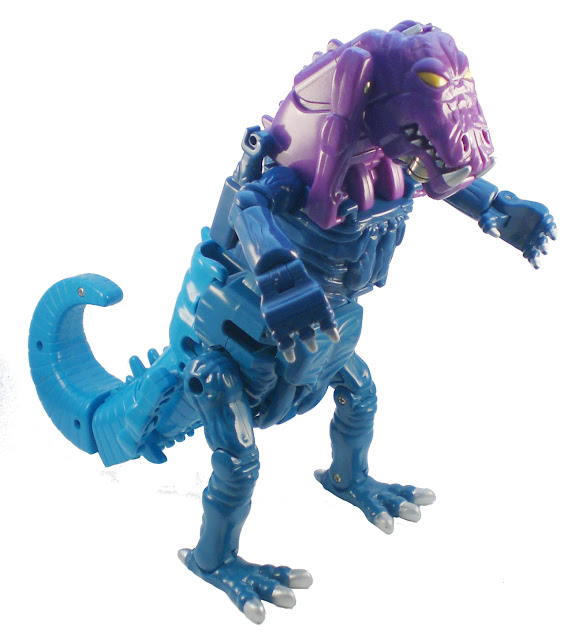 There are some really clever parts of the transformation. The best part can be seen from the front and the back, as Jawbone's hands grab onto Ribcage, and Ribcage's hands attach to the back of Jawbone. Due to the weight, he is pretty much stuck in one position - the legs can straighten, but it would just fall over. The arms move, but don't have a lot of clearance to do so. 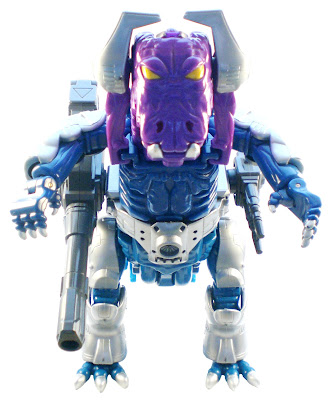 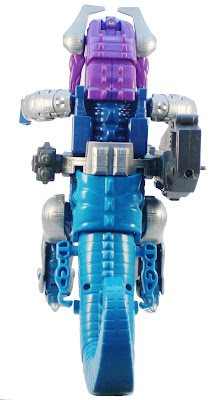 Fossilsaurus really comes alive when you add his accessories. There's a lot - he has armour for his legs, shins, arms and horns, as well as a belt and two guns - one small and one absolutely massive. The armour helps to fill out some of the gaps in this mode, as well as breaking up the blue of the body. As a result, the purple head is no longer as distracting as it could have been. I can't enthuse about this mode enough - it has real bulk to it from all angles, unlike a lot of other combiners released in Gobots and Transformers which tended to be either spindly or meant to be only viewed from the front. 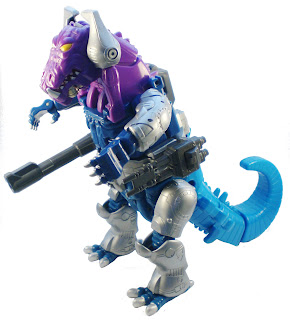 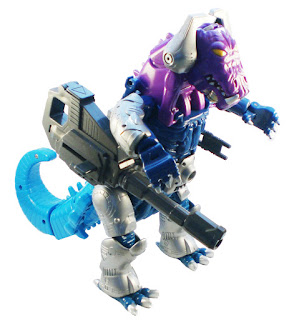 The big gun has a door on the top to insert little white pellets, which it then shoots across the room to be lost forever. Needless to say I'm keeping the white pellets in their bag! The mechanism does work well, and would be a lot of fun if you have a stronger stomach for losing bits than I do! The gun also looks great slung under his arm and really adds a sense of menace. 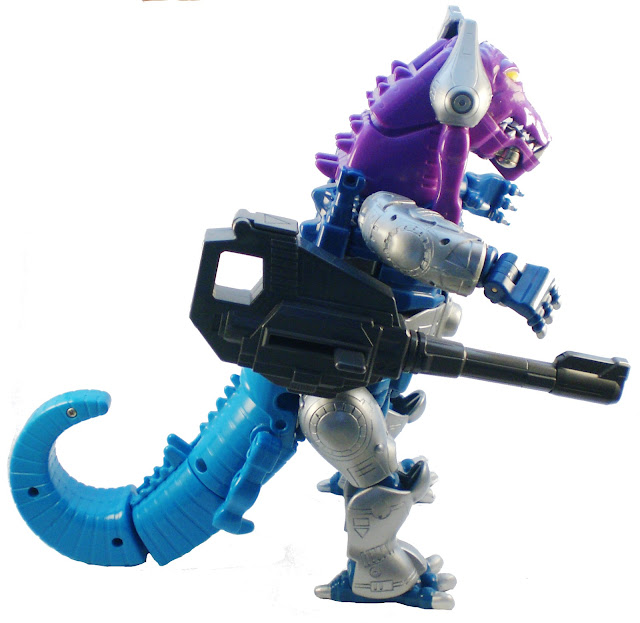 A lot of combiners tend to make sacrifices in one mode or another and end up looking strange. Enough care went into Fossilsaurus that both his combined mode and the individual modes look cool, or at the worst, interesting (see Animorphs Tri-Rex for a similar dinosaur combiner that completely messed up the individual modes). Yes, there are some weaknesses in the individual modes but it is all swept under the carpet by how absolutely awesome this combined dinosaur looks. Just the fact that something this crazy exists is cause for celebration.
Posted by Matt at 12:15