The Jewel Lords are some of the hardest to find Rock Lords, and also widely thought to be some of the best. Sunstone is no exception to this - like his fellow Jewel Lords Solitaire and Flamestone he is cast in transparent plastic, making this figure really stand out amongst the other Rock Lords. In some ways he is the least exciting of the three Jewel Lords, as he lacks the fame of Solitaire and the stand-out colour scheme of Flamestone, but he does have several unique features all of his own. 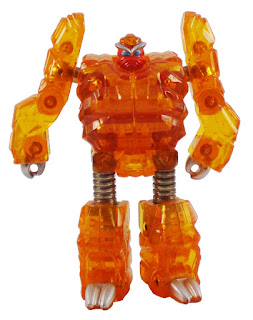 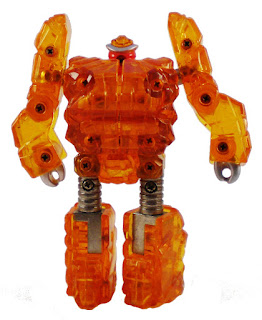 The most obvious thing about Sunstone when compared to the other Jewel Lords is how... rotund he is. Both Solitaire and Flamestone transform into mostly-flat rocks along the same plane, so look much thinner and lithe. Sunstone meanwhile is like a  jolly fat man, with a big round belly. He could almost be Rock Lord Santa if he was red and had a beard. Whilst the other Jewel Lords are cut like gems, with large flat seconds, Sunstone is much more craggy like a rock. This really helps him as it gives more of a varied surface for light to reflect off, creating a pleasing glow when placed on a windowsill. 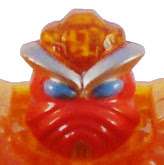 Sunstone's head is quite small in comparison to the rest of his body and looks more like a strange helmet than a face. His huge torso and small head gives him a squat, powerful look, which is accentuated by his big claw-hands and claw feet. There isn't much paint used, but it is tastefully used to good effect. 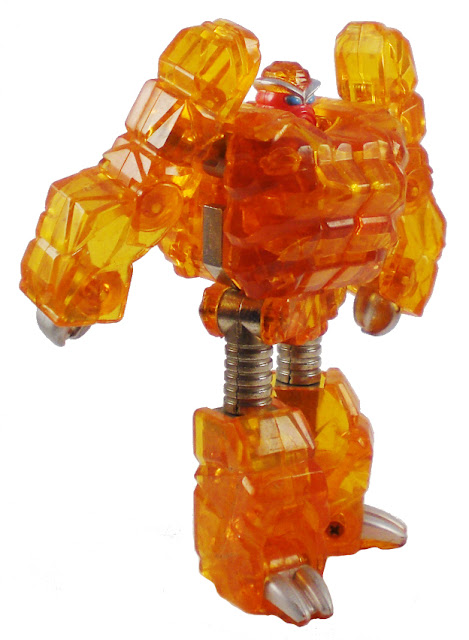 He features die-cast thighs which add some colour to his humanoid mode and match well with his limbs and face. His arms can move at the shoulders, elbows and wrists, and his legs can swivel but he is quite limited for poses due to his rotund nature and weight. He did originally come with a gold weapon which unfortunately I don't currently own. 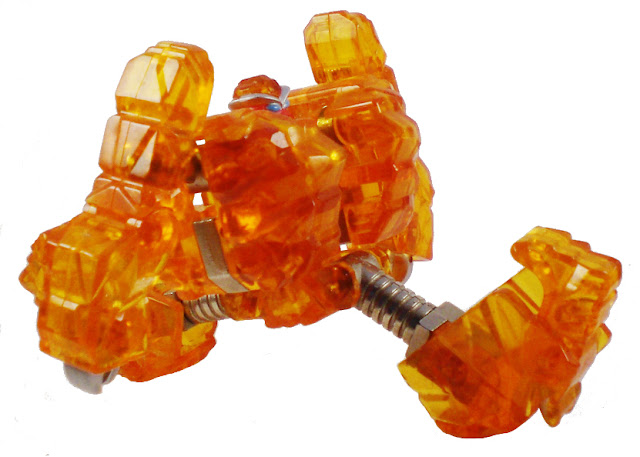 Sunstone's transformation is where he gets exciting. And I do mean exciting, because it's really clever! His chest splits apart revealing a groove along his front and back. The legs twist around and fold back over themselves to fit in this groove, and the feet fold in to reveal a part that hides the hinges. The arms collapse into the side to mirror the position of the feet, resulting in a rock with an 'X' shape around it. If there's one problem, it is that the head is sometimes tricky to move up and down as there is only a small tab to move it with, and the parts feel quite high-friction. 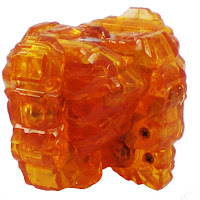 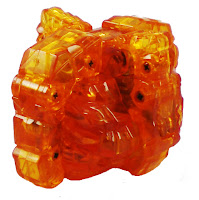 While Sunstone's rock mode isn't particular smooth, everything locks into place well and it clearly succeeds in what the designer was trying to achieve. In many ways it is similar to Stone Hook's transformation, though Sunstone is far more successful in that his rock is a lot more cohesive. His rock type was amber, and while it's a shame that he doesn't have a mosquito trapped inside him, it's unfair to criticise him based on not being influenced by a popular book/film made years after his creation.

He totally should have had a mosquito trapped inside him though!

The other Jewel Lords may have Sunstone beat in terms of elegance, but he more than makes up for it in his design and transformation scheme. He may very well have my favourite Rock Lord transformation due to the cleverness and how well it works at each stage. He's a solid figure all round, and really makes you wonder what more the designers could have achieved if the line hadn't ended when it did.
Posted by Matt at 11:00