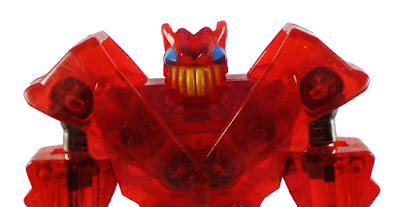 The Jewel Lords are some of the most sought after Rock Lords, both for their scarcity and their designs, and out of the three existing ones it is Flamestone who stands out the most. True, unlike Solitaire he doesn't have the added bonus of having appeared on television and being a female in a male-dominated line, but what he does have is... well, just look at him! 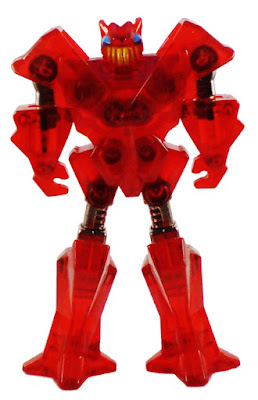 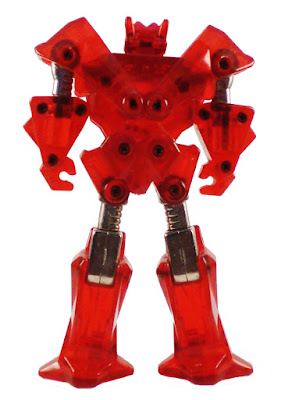 Flamestone encapsulates pretty much everything I love in an action figure. His design is really chunky, featuring huge gauntlets and boots. They're massive - I love them! The sweeping shoulder pads that stretch down to his chest really accentuate the feeling of a heavily armoured figure, yet being cast in transparent red plastic gives a feeling of beauty rather than just raw brawn. I'm a sucker for transparent plastic, and Flamestone uses it really well, with enough layers and angles to make it look great when the light hits him. 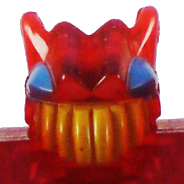 The only additional colour on Flamestone is his face, which is an oddly insect-like affair. While I'm not really sure what the yellow represents (are they teeth? Grills on a mouth-piece?), the colour helps break up the red of the rest of his body. Like the other Jewel Lords he has die-cast as part of his limbs to add a bit of colour, and like the others unpainted. It works better on him than Solitaire, as due to the darker plastic you don't see the joints inside him so easily. All of the Flamestones I've found have had loose legs, I assume this is due to the weight of the die-cast thighs, but thanks to his big angled feet he will always stand easily enough. 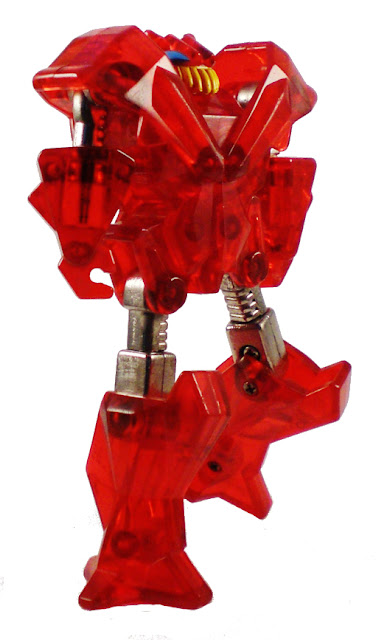 Flamestone has limited articulation compared to some of the other Rock Lords - his arms and legs only move side to side, but his arms can rotate at the elbow and he knees bend. His head is hinged and can tilt up and down, something that serves no purpose as part of the transformation and is just something extra the designers added. He should come with a gold weapon, sadly I do not yet own one. Jewel Lord weapons are another level of difficult to get hold of! 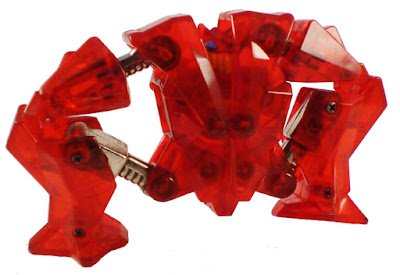 His transformation is quite linear, in that it all takes place on the same plane. There are some nice touches that stop it being a repeat of Solitaires though. The shoulder pads closing over the head is very satisfying, and the way the hands slide into the big knee pads is clever. It is smooth and easy, and fits together firmly so you're in no doubt you've got it correct.

Flamestone's ruby mode looks very solid and snugly fitting, with no obvious gaps. Another nice touch is that the feet are splayed out at the bottom of rock mode, enabling it to stand upright. Unfortunately the angle means that the best direction to display him is the back where all the screws are visible, rather than the front which leans forwards. Similarly the screws on the legs show on the other side, meaning there are screws on both faces (and this can't be solved by switching the legs around, as the feet are specifically angled). It's a good rock mode though, and the feet are just rocky enough to make a convincing part of a rock.

I love Flamestone. He's got a striking design and he's transparent!  While he has his faults (mainly in the articulation stakes, but then again this is an 80s toy, Rock Lords were just ahead of the curve generally), he's a great addition to the shelf and looks fantastic. I can't say enough good things about him!