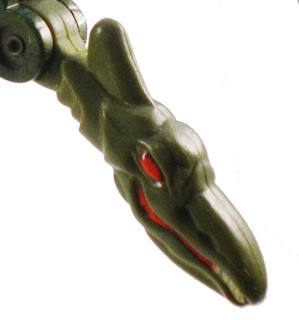 I have a massive amount of nostalgia towards Terra-Roc. I never owned him, but I wished desperately that I did! As a child, I had Spike Stone and my friend had Terra-Roc. I felt completely inadequate with Spike Stone next to the green majesty that was Terra-Roc. Did I covert my friend's Rock Lord? Yes. Yes I did. 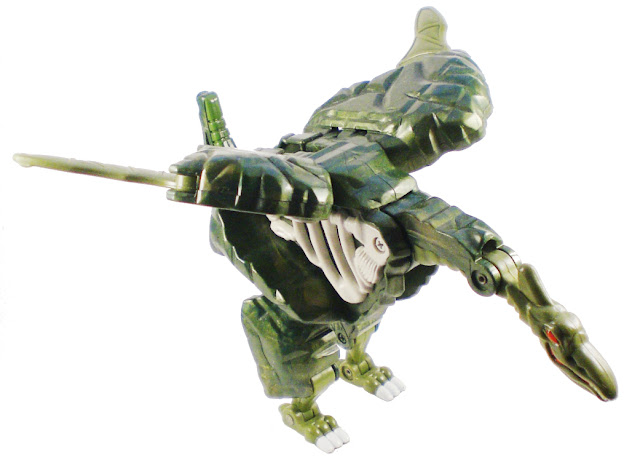 Terra-Roc is a rocky pterodactyl, but oh man, what a rocky pterodactyl he is! He's unlike any of the other Rock Lords, and for a line like this, that's saying something! While Spike Stone's transformation kept him being bulky and squat, Terra-Roc folds long thin sections out, ending up as a massive winged creature that looms over the other Rock Lords. The highlight (for me at least) are the big wings that fold out as panels and then have another section swing out from within. I'm a big fan of chunky panels, and the wings are very satisfying to look at and transform. Yes, it's a shame that the inner section is smooth plastic rather than being rocky but I imagine that's the only way they were able to get him to work. 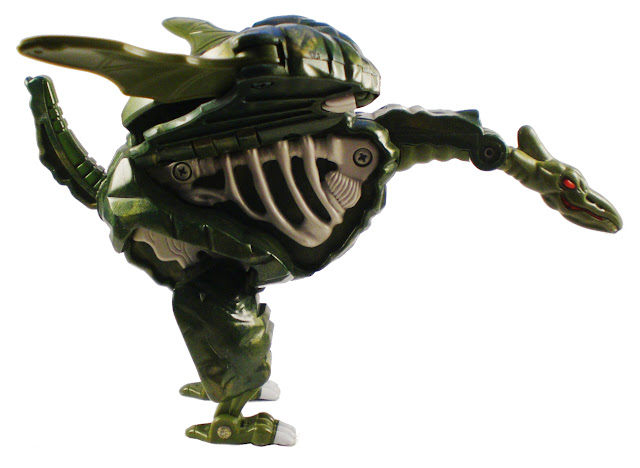 Two shades of green are used - a lovely pearlescent colour for the rocky body, and a plainer green for the inner parts. The two complement each other well enough and are just the right hue to not clash and not blur into one. The bone designs on his insides when his wings are raised are much more prominent than on Spike Stone, and the reveal of them gives him an exciting quality (to my child-like brain, anyway!).

As a bird, you can do a lot with Terra-Roc. He can be standing, or perched on his behind with his head down and wings folded. One issue I have found with this mold is that it is very difficult to find one where all the joints are tight. The head and legs are loose on most of the Terra-Rocks I have come across, which is a shame as it makes him difficult to stand without flopping over. This might in part be due to how heavy the figure is and the stress placed on the small ankle joints. While Terra-Rocs are quite common, it's worth getting hold of one with tight joints as it makes a huge difference. 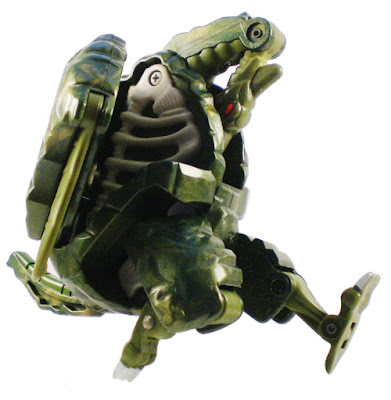 Terra-Roc's transformation is actually quite similar to Spike Stone's. His head and tail fold in on either side, and his legs fold up into the body. The main difference is that Terra-Roc has his massive wings, which sets him apart in my view as a much more exciting figure. 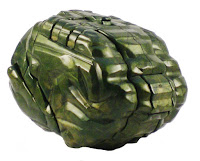 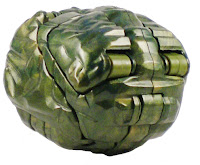 His rock mode is solid: the green colour looks very nice and he is sufficiently rocky, with very few clues how he transforms. Everything locks in place well and it's certainly one of the better rocks in the line.

I find Terra-Roc very exciting. Maybe it is just childhood nostalgia talking, but I love the fact he's a pterodactyl (the best dinosaurs!) and his big rocky wings! The problem with the looseness of the mold are frustrating, but it's possible to find one that will stand properly, and then the mold really comes to life.
Posted by Matt at 11:00