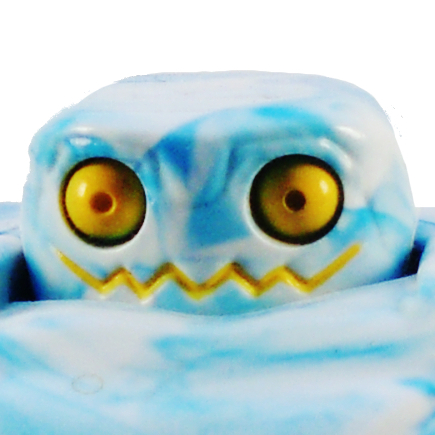 Rock Roller is the only good guy in the first series of Shock Rocks, and oh boy does he look goofy! The head sculpt is absolutely brilliant, with big googly eyes and a silly zig-zag mouth. Clearly someone was having a lot of fun with the design! Even if the rest of Rock Roller was terrible, the head would still help to elevate him as a classic figure! 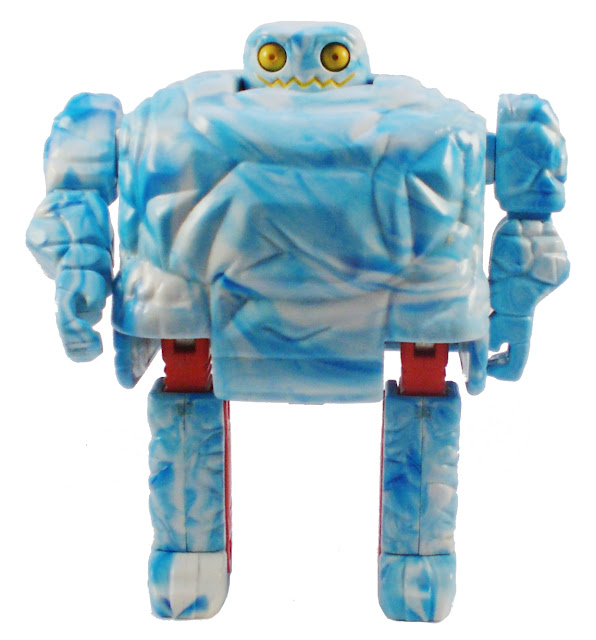 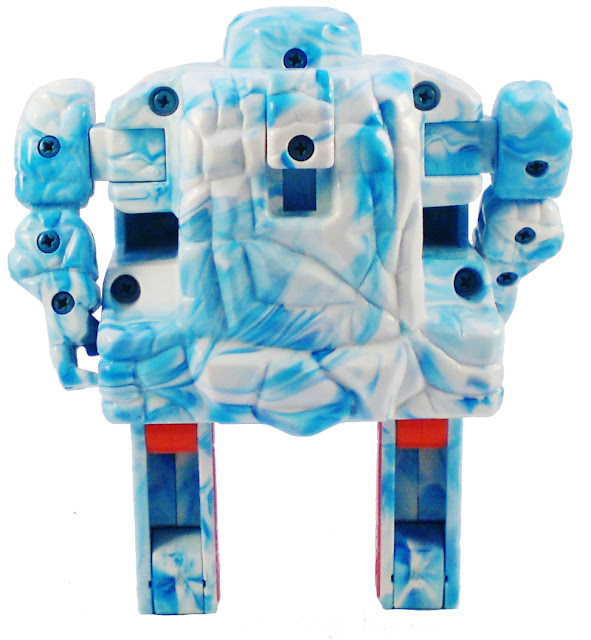 In many ways, Rock Roller's humanoid mode is very uninspiring, resembling a child's drawing rather than any sort of coherent figure. The tiny legs sticking out of the huge body are comical... and yet with the silly head, it feels like it works. He gives the idea of a fat, jolly fellow, the bright and cheerful colours helping with this. 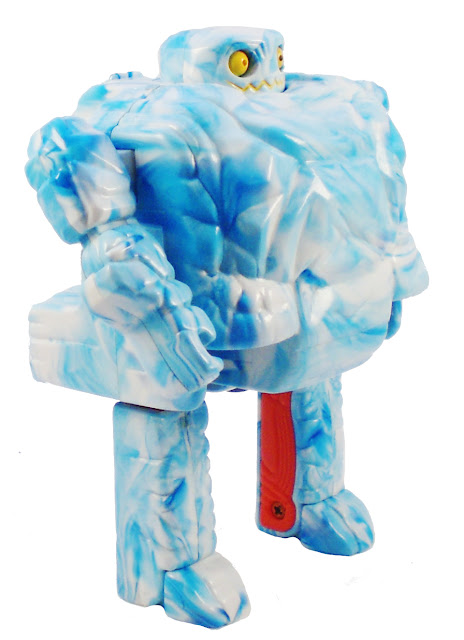 Rock Roller seems to have more of a problem with yellowing than other Rock Lords, but it's really worth it to find a pristine one. His white and minty blue swirls looks great in person, and there's some subtle use of other colours to break it up, such as the red on the inside of the legs. 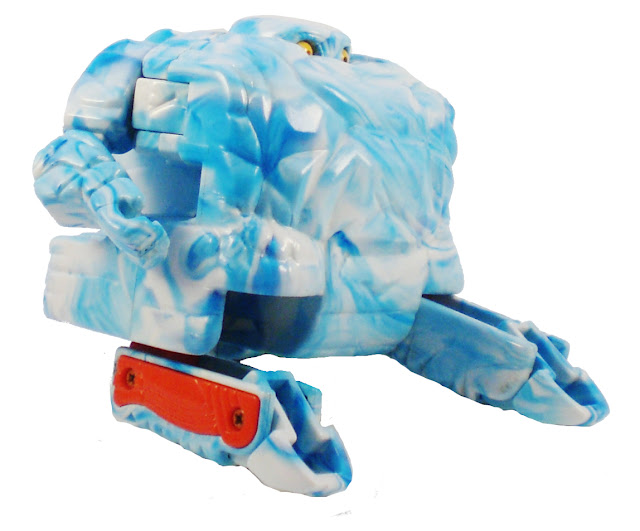 Rock Roller's transformation is very basic. His legs turn around and tuck in and his arms move into obvious slots on his side. His head slides up and down via a lever that clicks into place in a strangely satisfying way. Everything about him is sacrificed for his gimmick, to allow the mechanism space in the body to work. 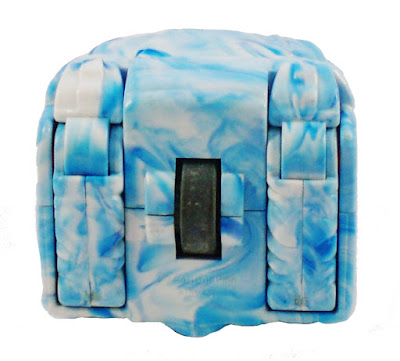 What sort of gimmick could be worth all this though? Rock Roller has a huge flywheel underneath him, which when revved up allows him to roll. This doesn't sound that exciting, but it's a really good flywheel, and Rock Roller doesn't roll, he ROLLS. In rock mode he turns into a massive plastic rock that simply smashes past anything in its path. It may lack the finesse of the string-based gimmicks of the other Shock Rocks, but it is probably the gimmick that works the best. 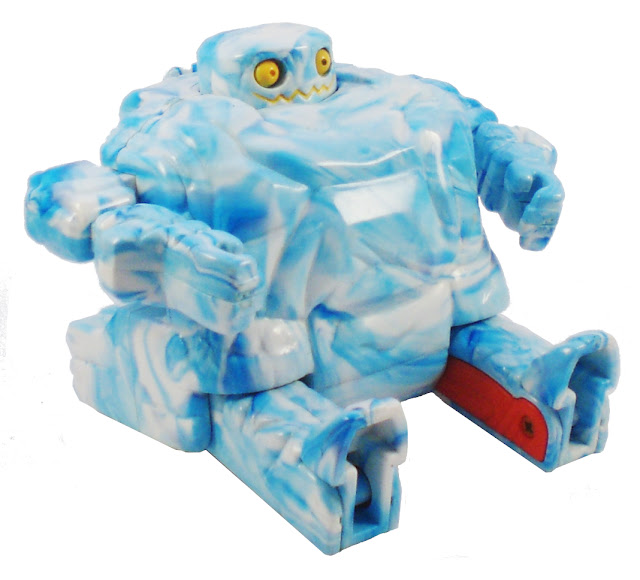 And yes, Rock Roller can roll along the ground in robot mode. It is glorious and hilarious. He can also roll with his head popped up like a rock with eyes. Hours of fun! 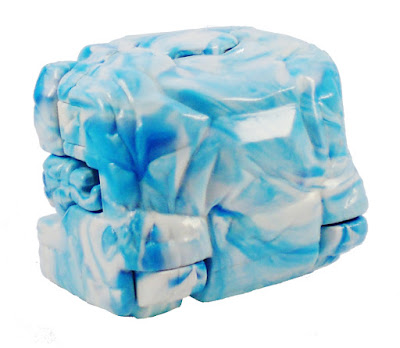 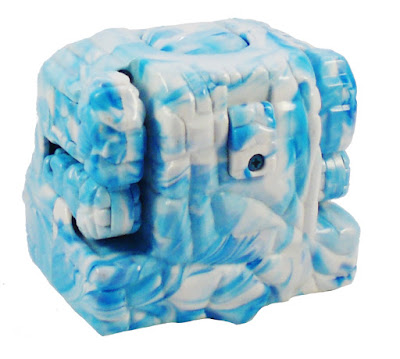 Rock Roller's rock mode is solid if unremarkable. Given his basic transformation you'd expect this though! The colour scheme really helps to make it visually interesting; had he been another colour he probably wouldn't be so well received. 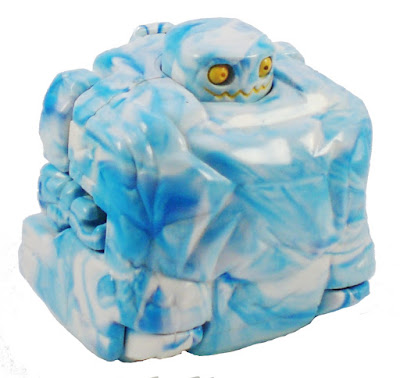 Rock Roller may look like a terrible figure, but he surprises in how fun he is, both in terms of the design and the gimmick. He's easily the hardest of the first series of Shock Rocks to get hold of, but is well worth it if you can manage it.
Posted by Matt at 11:02