Magmar is the Megatron to Boulder's Optimus Prime, the leader of the evil Rock Lords. There were no faction names in Rock Lords, simply the purity of 'good' and 'evil' being enough to show the bold clash of ethos between the two sides. Magmar also has a bitchin' green mohawk. 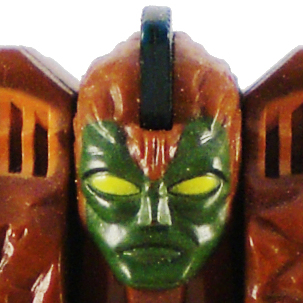 Yes, he's brown but there's a lot to like about Magmar. Unlike Boulder, he extrudes 'I am a man made from rock' from every rock-pore. The most striking thing (apart from the green mohawk) is how his head is sunk into his shoulders, giving him a bulky, tough guy look and his bulky gauntlet-like claw hands add to this.. He was played by Telly Savalas in the movie, though sadly doesn't look much like him in toy form. One thing to note with his head is that due to the transformation, it is very hard to find a Magmar without paint chipping on his nose. 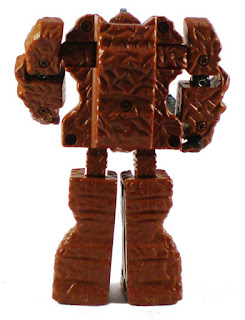 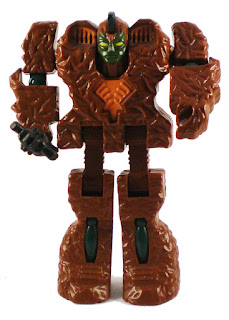 His brown body is broken up nicely by orange paint (there's a variant where they use slightly larger paint masks on his shoulders; if i get desperate enough for content you will see this!) and green plastic. A slight oddity is the green plastic cylindrical inserts in the front of his legs, which look like they are supposed to do something but don't and are just there to add colour. 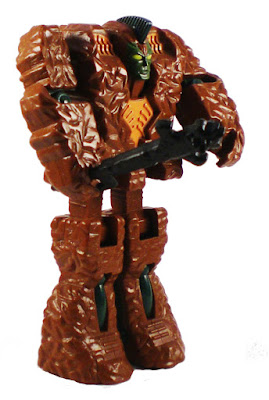 His elbows do bend, but because he's so bulky there's not enough clearance for them to really be of any use. A lot of the Rock Lords had added articulation that didn't always work properly but it was nice that they added it in, as they really didn't need to for the toy to transform. Due to the transformation his legs are able to sit down, but his knees bend the wrong way (forwards), unless you consider Magmar to be a bird. 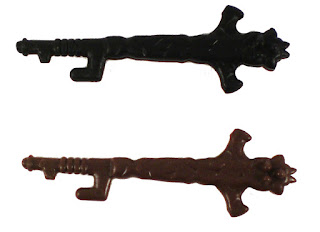 Magmar's weapon is an 'Ax-Rifle', and predictably it neither looks like an axe or a rifle. It's a club. Presumably like the rest of the Rock Lord weapons it was named by someone who had never seen a weapon before. It looks great in his hand though and fits the aesthetic of a big burly brawler well. There are two variants, black and brown. The black one looks better as most of him is brown anyway! 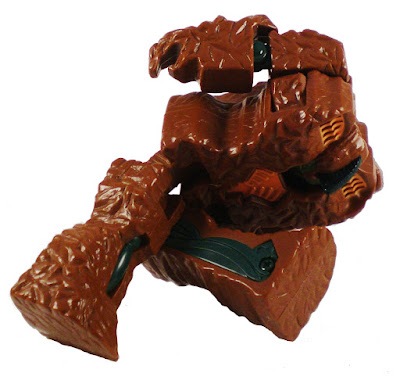 Magmar's transformation is nothing to write home about. His head flips down, his legs fold over his body and his arms fold back. There's some nice touches though (they didn't need to make his head flip down as the legs cover it, but they did it anyway) and everything feels like it fits into place solidly. It's also clever how the angled hinges mean that the legs are apart in robot mode but together in rock mode, something that's easy to miss! It's a really fast transformation, but satisfying and quite fiddle-worthy. 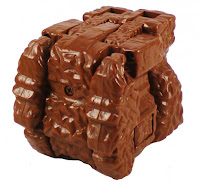 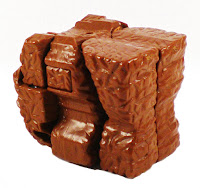 In rock mode, Magmar is a big square brown rock. Fine. He's 'igneous' which could be any sort of rock really. Yes, it's clear that there's arms and legs in there, but they're disguised decently enough if you look at him from the right angle. I like to stack all my Magmars in a pile!

Magmar is a good figure, solidly made. He's a bit simple, but there's enough going on in the design that he remains fun. Also he's got a green mohawk.
Posted by Matt at 00:35