If Boulder is the least Rock Lord-like Rock Lord, then Granite is the quintessential Rock Lord. Everything about him screams “I am a Lord of Rock.” He’s craggy and bulky with a big rocky head. There’s a few splashes of colour on his face and blue die-cast thighs, but aside from that he’s a massive hunk of rock. Rockety-rocky rock. 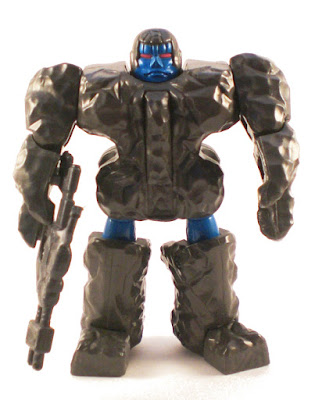 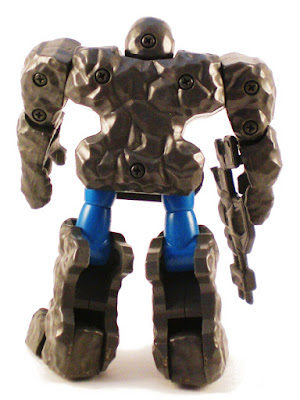 He’s exactly what you think of when you hear the word ‘Rock Lord’. It’s unfortunate then that he looks a bit boring. It’s obvious how he transforms, his colour scheme is dull and there’s not much of interest in how his humanoid mode looks. It’s pretty much what you’d expect a rock man to look like. 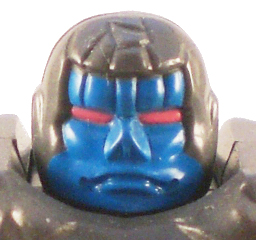 Granite was probably the Rock Lord I was least enthused about getting because of this, but in-hand he’s actually really nice. Yes he’s a bit dull, but the blue is vibrant enough. His face has a sort of ugly charm to it and he looks imposing and wide. What I hadn’t realised is how odd his arms are – his fingers start up at his elbows, in a large three-clawed shape. 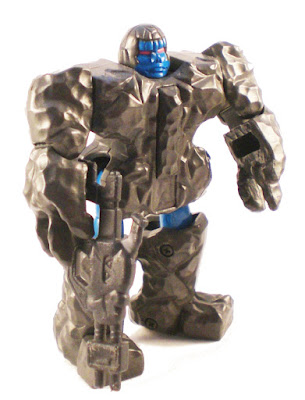 He’s a very solid figure. Unlike some of the other Rock Lords, everything locks in very smoothly and it’s clear how it all should work. Part of this reason though is that he’s very two-dimensional. With the exception of his leg-swivels, everything happens on one plane and so he feels a bit ‘obvious’. 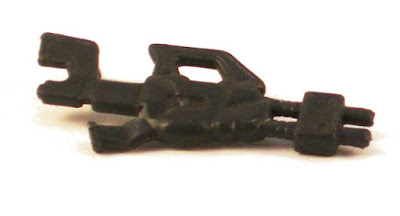 Granite comes with a gun in either red or black. I’m saving the red gun for an extra special article in the future, so keep your eyes peeled! The gun pegs into the side of his arm – for some reason the peg is especially prone to bending or breaking, and it’s surprisingly common to find Granite guns with missing or badly bent pegs.

Given his all-over dark grey colour scheme, the red gun is clearly the weapon of choice, but I’m using the black gun here as I’m a rebel. 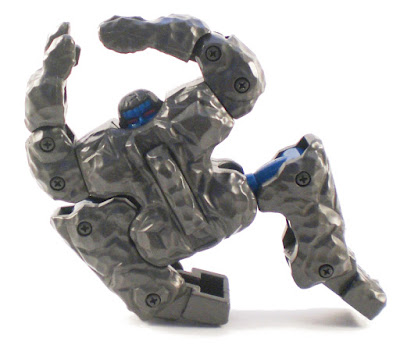 Despite being basic, Granite’s transformation is oddly satisfying. His head slides into his torso using the slider on his chest (this slides smoothly on some Granites and seems to lock hard on others. I’m not brave enough to dissect my collection to see if there are moulding differences internally). His legs fit into those big leg-shaped grooves on his side, though the nice springy die-cast thighs make this a bit more entertaining than it should be. The best bit though is that his hands cover his head, his fingers interlocking with each other. It’s fun, despite being so two-dimensional. 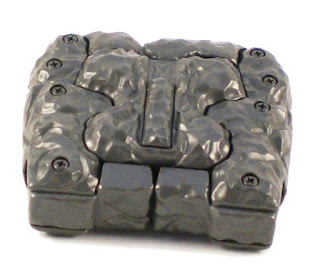 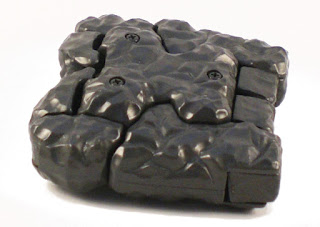 As a rock, Granite is a big flat chunk of dark grey granite. His humanoid mode is disguised very well, but at the same time he’s not an interesting looking rock and given that he lies flat, he’s a bit boring to display. Also there are screws visible on both sides. It’s good that there’s some sort of variation in rock modes rather than having everyone be roughly spherical, but at the same time it’s hard to get excited about a flat grey lump.

Granite might not win any prizes, but neither does he do anything that makes you think “Eeeh, that’s a bit rubbish”. He’s a solid (if uninspiring) figure, but a bit more fun than he looks at first glance.